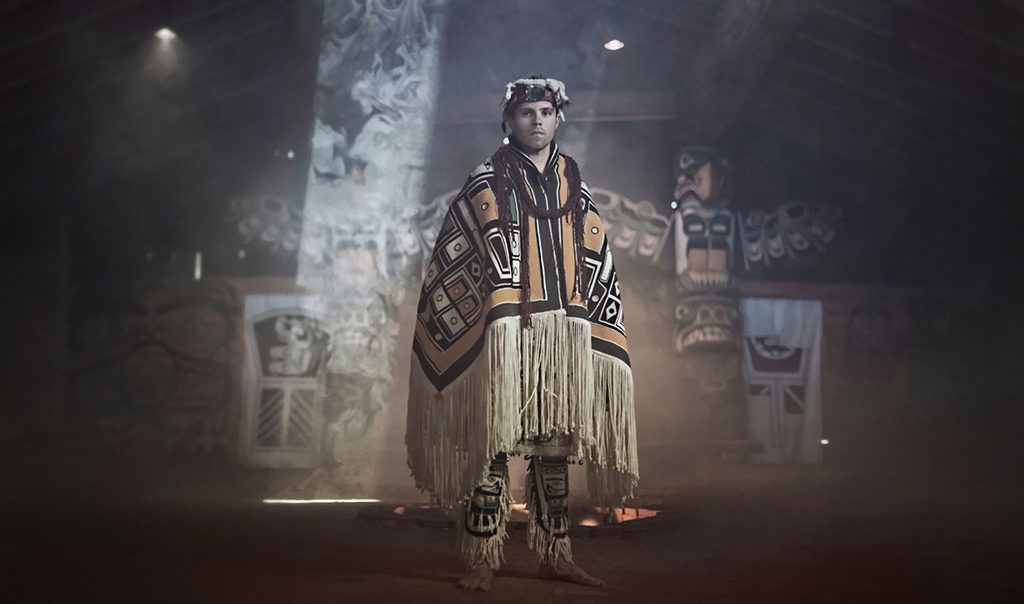 Karver Everson was born in Comox, BC in 1993 and named Gayustistalas – a name that once belonged to his father, Chief Rob Everson of the Gigal’gam Walas Kwagut from the Kwakwaka’wakw People. Influenced greatly by his family’s connection to their cultural heritage, Karver has always been eager to learn and uphold the cultural traditions of both his K’omoks and Kwakwaka’wakw ancestors.

Karver’s passion for art began early in life and First Nations art forms made appearances in his drawings and pieces throughout his childhood and youth. It was when Karver decided to further his skills at art school that his First Nations paintings and drawings flourished.

As an artist in the early stages of his life and career, Karver’s history as a carver is relatively recent. In the Summer of 2013, Karver’s family was preparing to host a potlatch and Karver was called on to create many ceremonial pieces for the family. He’s been carving almost every day since.

Karver has been blessed by the mentors in his life. He has worked under the tutelage of Kwakwaka’wakw master carvers Richard Hunt, Calvin Hunt, Mervyn Child and David Knox. His uncle, Andy Everson, has also taught him to understand multiple facets of Northwest Coast art including rules of formline and design.

Karver has completed his Diploma of Fine Arts from North Island College. His next goal is to earn a Bachelor of Fine Arts within the next four years.

He is grateful to all the people who have helped him throughout his life and wouldn’t be where he is today without their love and support.

I am fortunate in my art career to work with noteworthy and skilled K’omoks and Kwakwaka’wakw artists. I apprenticed under Richard Hunt and David Knox early in my career; Calvin Hunt has mentored me in several totem poles, which has allowed me to grow as an artist. I have worked with Randy Frank on four totem poles so far and we are working side-by-side on two more for Summer 2017. I am so grateful for my mentors who continue to support my development as an artist.

Load More
Something is wrong. Response takes too long or there is JS error. Press Ctrl+Shift+J or Cmd+Shift+J on a Mac.